Hurricanes have the potential to dump enormous amounts of rain, sometimes as much as 10-15 inches, on areas they pass over, and this rainfall can continue long after the storm moves inland.

In addition, as these storms strike the coast, they can push huge walls of water – the storm surge – into coastal areas, causing catastrophic damage, the kind witnessed in Mississippi and Louisiana during Hurricane Katrina in 2005.

According to records during the past 30 years: 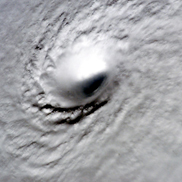 Hurricane Wilma is the first 'W' name used in the Atlantic Basin since alphabetical naming began in 1950. With Wilma, the 2005 hurricane season broke the record for most storms in a season, previously held by the 1933 season. The twelfth hurricane of 2005, Wilma currently holds the lowest recorded pressure, 882 mb, for a tropical cyclone in the Atlantic Basin, as well as the lowest pressure for any cyclone measured in the Western Hemisphere.